The Puerto Rican Crested Toad Conservancy – PRCTC, (formerly the Species Survival Plan (SSP)) is a cooperative breeding and conservation program administered with the Association of Zoos and Aquariums  (AZA). It is recognized that captive breeding is not the sole solution to the numerous species that are experiencing major declines in the wild. However, in certain cases, scientifically managed breeding programs, along with public education, scientific research, habitat preservation and reintroduction are essential to species recovery. 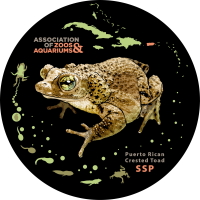 In 1984, the Puerto Rican crested toad became the first amphibian to receive SSP status and is considered a Green SSP, since the population is greater than 50 individuals and is able to maintain over 90% genetic diversity at 100 years or 10 generations. The SSP is guided by a working master plan that defines goals and objectives for the program. Recovery goals include island-wide education outreach, protection and restoration of existing habitat, creation of new ponds to support six self-sustaining metapopulations (three in the north and three in the south) and research. The PRCTC has developed many partnerships over the years and recovery efforts are executed through an MOU between the USFWS, PRDNER and PRCTC.